Barbara Kingsolver published her latest novel in October of this year. Unsheltered was much awaited given that Kingsolver has a number of acclaimed novels under her belt, including The Lacuna and The Poinsonwood Bible. Unsheltered tells two parallel tales of families living in the same old house, in Vineland, New Jersey, about 100 years apart. The novel takes on fascinating historical elements, but overall falls below this reader’s expectations. 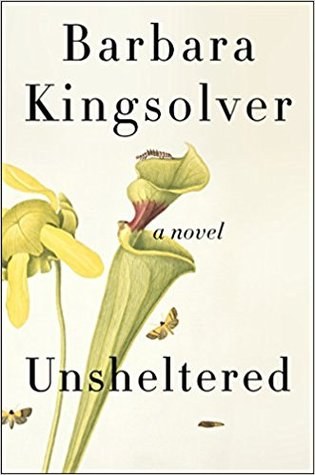 On the first path, Willa Knox is a journalist who has lost her stable newsroom job. Her husband, Iano, is an academic who recently lost hist tenured teaching position, making these two 50-somethings the example of a family on the brink of financial collapse. Around them are their children, still hovering despite being in their twenties. Zeke is a business school grad who married early, had a child, and lost his wife to suicide as the book begins. Antigone (Tig) is their free spirit daughter who looks disdainfully at consumerism and material concerns. They move into the big, falling house as a result of Willa’s inheritance and their running out of other options. It’s crumbling, and this family is struggling on all fronts.

Thatcher Greenwood is a school teacher who lived in that house a century before Willa’s family. He is married, but his relationship is not as fulfilling as he first thought it would. He is knowledgeable of medicine and nature, and will face the wrath of dominant town ideas that reject the scientific progress of the times. In this turmoil, he will meet his neighbour: Mary Treat. Based on a real historical character, this woman was a naturalist: one who illustrated new species, observed nature and wrote scientific articles for magazines. She also corresponded with none other than Charles Darwin. While facing the scorn of the entire town, Thatcher will discover within Mary Treat a comrade, a true confident and a woman who shares his passion for science and the living world.

The book’s description gave few hints its topic. As a result, I started reading without a good sense of what I was jumping into. A few chapters in though, I was intrigued by the author’s comparison of centuries and the social commentary that stemmed from it. In Willa’s world, she is coming to grips with crumbling social infrastructure and public services that is leaving individuals in the lurch. In Thatcher’s times, he pays a hefty cost for going against the grain and challenging widespread assumptions about the world he lives in. In both case, the characters' lives are impacted by a broader political and economic context that defines their challenges.

The novel is action packed. The reader moves from one time period to the other, back and forth from the challenges of turn of the century America in 1800 and modern day’s economic precarious situation for so many middle and working class families. Despite the constant plot developments, the novel gets lengthy and somewhat slow in the middle.

As a reader, I wanted fewer cliché political dialogues, and more Mary Treat. The narrative path in which Willa was digging up facts and correspondence from Treat’s life was so strong that it seems a lost opportunity to limit the portion of the novel dedicated to giving her life. As a historical character who led the way for women in science and who had a life-long passion for natural creatures of all kinds, I would have loved to get a broader sense of the objects of her interest.

Kingsolver’s writing has an attractive quality: her stories have depth and humanity. When I read The Lacunaearlier this year, I loved her choice of political characters (Frida Kahlo and Leon Trotsky are part of the main cast). Her characters' drive and personality still soared above the political intention of her writing. After reading Unsheltered, I felt like Kingsolver had instead prioritized a certain political message above the essence of her characters, to the detriment of the entire novel.

Kingsolver is an author I want to continue to follow, and so I happily overcame some of this book’s lengthier and slower parts to finish it. I will read her again, but would recommend starting with her earlier books if you’re just getting to know her. Unsheltered has some curious and quirky bits which I loved, but the overall narrative fell short.