Book review: The Housekeeper and the Professor by Yoko Ogawa

In this simple novel, Yoko Ogawa brings to life an improbable trio with an absolute passion for prime numbers and baseball. Published in 2003, translated into English from Japanese, The Housekeeper and the Professor is a quick read that will surprise readers with its purity, humour and hope. 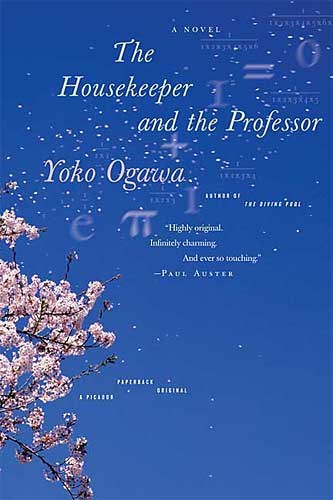 On the surface, and as the title says, this is the story of a professor and his housekeeper. The professor is a mathematician who, after a serious accident many years ago, suffers the effects of a brain injury. His memory lasts only 80 minutes, after which he forgets any event or conversation that took place before. He lives in a constant loop of forgetfulness, a solitary adventure where he is both conscious of his limitations and helpless to his condition. To cope with daily obligations and social interactions, he pins little notes to his worn-out jacket. They remind him of important information and the people who surround him on a daily basis.

One of these notes explains his new housekeeper. She is the latest hire in a chain of agency housekeepers assigned to the Professor’s house. He often repels them, or they quit in exasperation cause by the Professor’s unpredictable behaviour. But this one is different. On his pinned paper note, he reminds himself that she has a 10-year-old son, which he calls Root because of the same of his head is like the symbol for the square root. He soon asks her to bring him along when his school day is over instead of leaving him at home, on his own.

Despite his short-term memory, the Professor thinks in numbers and spends his time solving mathematical problems published in the newspapers. He even earns money spending months focusing on the same problem before mailing the solution to the newspaper. His passion is contagious, and he involves the housekeeper in his most cherished activity: to look beyond the underwhelming appearance of prime numbers.

Perhaps because she has more time for the professor’s quirks than other housekeepers, or because she is genuinely curious about numbers, she plays along. Based on fractions of mathematical information she collects from the older man in her care, she begins to see connections between numbers she had not seen before.

To this love of math is added an obsession with baseball. Root and the professor will spend hours in each other’s company, listening to games on the radio and sharing trivia. For Root, being mindful of the fact that his new friend, the Professor, is locked into a certain time period is a challenge he happily whirls with.

In this improbable trio will flourish a friendship, one that goes beyond the context of care giving, and will lay the foundations for what the touching characters may even call a family.

The direct writing style makes this novel a no-fuss, no-frills kind of read. The story is a thing of beauty, just like the descriptions of blooming cherry blossoms and summer rain storms that punctuate this book.

If you haven’t done simple math in a while, I recommend reading this one with a pen and paper nearby. You may just feel the urge to scribble some simple calculations. That’s how powerfully the love of numbers is weaved into this book. The Housekeeper and the Professor is a smooth, hopeful read that will do just right for the end of the year.

The Housekeeper and the Professor by Yoko Ogawa