Book Review: How Will Capitalism End? Essays on a Failing System by Wolfgang Streeck

As socialists, it’s no surprise to us that the study of capitalism should be paired with an understanding of history, sociology, and politics. In Wolfgang Streeck’s 2016 book How Will Capitalism End? Essays on a Failing System he does just that. In fact, he does more than that, he gives capitalism a death sentence and it doesn’t look good. 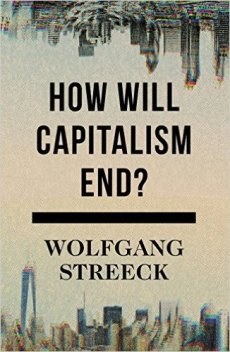 The failures and crises of capitalism will continue to develop, and by its design, capitalism will eventually die at its own hands. The need for continued growth has caused great wealth inequality between people, as well as between nations. The relationship between democracy and capitalism is faltering and it’s likely that if politics continues to support the economic system, democracy will be in bigger trouble than it currently finds itself in.

There have been many books published recently that delve into the problems that democracy face. On Tyranny: Twenty Lessons from the Twentieth Century (2017) by Timothy D. Snyder and /The Return of History: Conflict, Migration, and Geopolitics in the Twenty-First Century/ (2016) by Jennifer Welsh are just two examples that made their way into my reading list. The first is a pocket-sized warning about democracy set against the rise of authoritarianism. It gives short and easy to understand tips for people to follow. The second argues that history cannot be understood as progress. For some reason, humans like to believe in continuity and that things will be better in the future, regardless of ongoing human rights abuses and the current rise of fascism. Many of the more mainstream liberal warnings about democracy, including both these books, do not fully consider the problem that is capitalism – particularly late capitalism and its stronghold on democratic institutions and, quite frankly, our lives. Of course, nods to rising economic inequality make appearances, but to critique capitalism as an incredibly flawed and unsustainable system doesn’t fall under a liberal and neoliberal agenda.

Watching the news following Black Friday, we hear stories of how this year’s sales have been the best seen in recent years. We are told which corporations came out on top and by how much, with sometimes a brief mention of the good people do on Giving Tuesday. Other weeks, media stories contain accounts of the number of jobs created (or lost), how the economy is on the upswing (or the downswing), which stocks are doing well (or poorly), and the current unemployment rate. Rarely does the average person receive insight about how the economy actually works. We’ve been set up to believe in the economy as something that exists on its own, separate from historical development, as something that sometimes requires a hand from the government, but most certainly that should not be constrained by government.

Wolfgang Streeck paints another picture in How Will Capitalism End? He says, in one of the most gruesomely creative lines of his book, “[b]efore capitalism will go to hell, it will for the foreseeable future hang in limbo, dead or about to die from an overdose of itself but still very much around, as nobody will have the power to move its decaying body out of the way.” The end of capitalism is on its way, as is, most likely, the end of democracy as we know it. This narrative is so far removed from our discourse and normative understanding of ‘the economy’ that it will be inevitable that when Death arrives, it will come as a devastating surprise to many. Of course, it will be a progression. We won’t wake up one morning to find an invitation to capitalism’s funeral but, at some point, we will no longer be able to ignore the crises.

Streeck’s book a collection of essays that highlight the unfortunate reality of our democracies, economic system, and lives under capitalism. While focused on the US and Europe, it allows for a broader and critical understanding of how capitalism works (or doesn’t work). It includes insight of the projected end of capitalism as we know it, the crisis of democracy, consumption, financial consolidation, European political and economic crises, and how capitalism should be studied and understood. “While we cannot know when and how exactly capitalism will disappear and what will succeed it,” he says, “what matters is that no force is on hand that could be expected to reverse the three downward trends in economic growth, social equality and financial stability and end their mutual reinforcement.”

A reading of this collection provides insight and may at times expand ones thinking of how capitalism operates and impacts individuals, the polity, and society. It does not, however, bear good news or veil the reality with positive potentialities. The book informs us that, so long as we continue to live under capitalism, the future will be bleak. A few key arguments unfold: rising inequality, a loss of faith in political systems (which gives power to populist alternatives such as white supremacy, neoliberalism, and sometimes libertarianism), and the continued destruction of the environment (which increases climate refugees and inequality, and causes a loss of biodiversity and traditional access to the land). A bleak future indeed, and one that we are undoubtedly already experiencing.

Streeck’s book provides a desperately needed reality check. It is not light reading, nor is it very accessible, but the essays are an important reminder of why the study of economics cannot be separated from the study of sociology or politics. This reverse is also true. Recently, the natural environment has been given a terrible diagnosis by scientists with the publication of the UN report on global emissions that identifies the need to keep warming under 1.5°C to avoid global devastation. Attempting to provide solutions to the climate change crisis without pairing it with a severe critique of capitalism will only delay meaningful change. Capitalism, after all, requires continued growth. This means that it will continue its path of deforestation, oil extraction, and exploitation of labour so long as there are promises of increased wealth and capital.

Our attempts to improve upon capitalism have had the consequence of strengthening it and (sometimes) saving it from crises. Streeck explains the dynamic relationship between capitalism and the state, and points to how capitalism requires the state to maintain laws and legislation that legitimize the  capitalist economy. However, the further society has progressed, the more power has been given to capital interests, the more our politicians prioritize the economy over the well-being of the population, and the more capitalism wins. When we speak about the need to save the banks from failure instead of investing in health care or education, we prioritize capitalism. This has the consequence of giving capitalism more power and taking it away from people.

Democracy has been failing due to this prioritization. Regardless of what government we elect, capitalism has us in a headlock. We saw that with the election of a socialist government in Greece and its failure to push through socialist legislation. Other European governments and financial institutions ultimately prevented it from delivering on the social programs it was elected on. Imagine if Canada unilaterally ceased the extraction of oil, how would other countries and financial institutions react? For starters, we can imagine that they will impose sanctions and apply pressure because, within a globalized world, countries rely on imports and exports to maintain certain expected living standards – standards that may actually be unrealistic and incompatible with a sustainable longterm economy. In short, other countries ‘need’ our oil. This is by no means an excuse for its continued extraction (which causes severe environmental and social damage, particularly at the expense of Indigenous peoples), but it is our reality. So when we offer solutions and alternatives it’s important to think about intersectional analyses that allow for an understanding of economics, sociology, and politics. Without this type of approach, we are guaranteed continued failure instead of the development of a holistic approach to how our societies and communities should be organized.

This book doesn’t necessarily offer solutions other than the need to grow and strengthen our analyses within political economy. It explains that capitalism will continue to be in crisis, as it is a system of self-destruction. Its search for continued growth results in greed and avarice and ignores the broader socio-economic consequences that inevitably result. The economic crash of 2008 provides just one recent example. More crises are to come and, like in 2008, they will disproportionally impact lower-income and already marginalized people the most. When we prioritize capital, we bail out the banks and leave the people behind – fending for ourselves, turning on each other for the scraps.

James Baldwin once wrote, “[p]eople who shut their eyes to reality simply invite their own destruction, and anyone who insists on remaining in a state of innocence long after that innocence is dead turns himself into a monster.” This statement was birthed in the context of racial inequality but nonetheless provides prescient insight and parallels with other forms of crises.

To read chapters of How Will Capitalism End?, New Left Review has published a few online.

How will capitalism end? by Wolfgang Streek