For the first time in what feels like a long while, I finished a recent and popular book. Celeste Ng’s Little Fires Everywhere came out in September 2017 and an announcement earlier this month confirmed its TV adaptation in the near future. Set in Shaker Heights, Ohio, this novel tells the story of one suburban family confronted with the arrival of a mother and daughter to their rental unit. Nostalgic children of the ’90s, be warned: this book hits all the right notes. 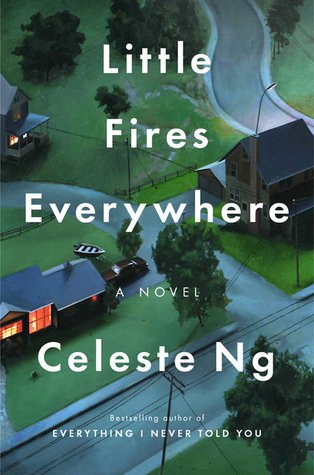 The Richardsons are an established family of Shaker Heights.

Out of the four kids, Trip, Lexie and Moody appear to excel at life and school and everything. Izzy, on the other hand, doesn’t quite match the mould imposed on her. Her parents, Mrs. and Mr. Richardson, respectively a reporter for the local paper and a lawyer, have high expectations and see themselves as upholding the standard of excellence true to their beloved community.

Shaker Heights is described as a planned community. Centralized rules dictate how the city functions from street traffic to the location of schools.

Enter Mia and Pearl, a nomadic mother-and-daughter pair who pick Shaker Heights as their next home, and rent a house from the Richardsons. Mia works odd jobs to pay the rent, while she maintains an active practice of art and photography. Pearl, in high school, has only known a lifestyle where she gets uprooted every so often and starts over in a new community.

As soon as they move in, she becomes friends with Moody and hopes that this will end their up-and-go cycle.

The action of the novel really flesh out when long-time friends of the Richardsons adopt a baby left behind in the night at a local fire station. The baby is of Chinese heritage, and while they are over the moon about (over) caring for the child, a battle of custody will soon erupt which will shake Shaker Heights at its core.

The plot twists show that this novel is about race and privilege. The way that the established, mostly white, population of the town comes down hard on a racialized mother shows the intricate workings of power and systemic racism.

Also at play in this novel is the idea of maternity from a multitude of different angles: access to abortion, teen pregnancy, the “good woman”, around adopting children. With the two strong characters of Mia and Elena Richardson, both depicting mothers as different as could be, motherhood takes centre stage.

While this idea of a “planned community” piqued my interest, I found the descriptions thin and its uniqueness unbelievable.

Shaker Heights appeared hardly any different than a regular suburb, and while the question of urban planning and the well-being of humans living in cities is present, it was of much less significance. Behind this image of a perfect community, however, there are clashes, like little fires, that appear and consume everything along the way.

The story is told in a non-linear fashion, and the reader learns elements of characters' past which inform their present actions.

One of the strong points is the author’s ability to convey the roller-coaster stages of a teenager’s emotions. With five teenagers to play with, there’s plenty of space for interaction, conflict and growth between them.

Also, from Nutri-Grain bars to Jerry Springer, the sprinkling of references to the ’90s will please those who went through high school during this period.

Little Fires Everywhere was not my favourite book of the year. I found the language a tad simplistic and the content often shallow, and even arduous to get through. I add an important caveat to the last statement: the ending pays off.

It’s worth reading to the end. The timeliness of its publication and the upcoming TV Shows gives the reader an additional reason to check it out.