When Zadie Smith was promoting her fifth novel, Swing Time, in the fall of 2016, the way she talked about race, class and gender in interviews compelled me to put it on hold at the library. Her first novel to be narrated in the first person is a story about dancing, growing up in the working class communities of the East side of London, and facing the many facets of being an adult. 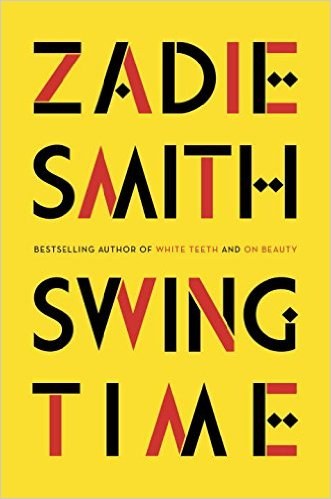 At its heart, Swing Time tells the story of two childhood friends who met in a community dance class where they were the only two brown girls: Tracey, and the narrator who remains unnamed throughout the book. Tracey’s white mother and the narrator’s black mother never really getting along for a series of reasons. As kids, they navigate the waters of family and school life in the 80s, finding peace and pleasure in old films and music – hence the title of the book.

Tracey is the one with talent, despite her hothead personality, while the narrator makes up for lackluster dancing skills by being studious and keen. These attributes will follow them as they will orientate themselves to different worlds. Tracey will always be close to home, staying put and making a life as best she can in the village of London, while the narrator will stray away to villages from Gambia to New York City.

The story is told in non-linear fashion as we swing back and forth in time: from childhood stories to the narrator’s decade spent as the personal assistant of an international superstar with a jet set lifestyle. While the narrator is driven by her career, her link with Tracey and other friends and family fades. One of the great tensions of the book is her relationship with her mother, an autodidact community builder who works her entire life for social change and becomes an elected – backbencher but nevertheless – Member of Parliament.

Through a series of stories, anecdotes and memories, we learn to know the hopes and fears of the young girl, and the impact her childhood has on her present-day reality. In describing her parents, and their eventual breakup, the narrator explains some of the flaws of their relationship at the start: “Within the context of the marriage it was a romantic gesture: they’d first encountered each other at a meeting of the SWP, in Dollis Hill. But even this was a form of misunderstanding for my father had gone to meet nice leftist girls in short skirts with no religion while my mother really was there for Karl Marx.”

The narrator’s mother is a fascinating character, so much so that it was conflicting to see her treated with cynicism and contempt by her daughter. The rejection of her mother’s politics leads the narrator to make some questionable choices in her youth, but that, I suppose, is part of the lessons she will learn in due time. While social commentary on race, gender and class is present, it sometimes feels like the narrator begrudgingly ascribes to those politics, like she feels she has to but doesn’t really believe in them.

In the end, judgment is a theme that was present throughout the story. The narrator’s childhood is defined by Tracey’s judgment on herself and her family. She lives with the weight of her mum’s judgment that takes the shape of hope for her daughter to accomplish great things, to live a life beyond what’s available to young girls like her. She is burdened by her own hard judgment of herself, which will take years and a drastic change of life to shake.

The great strength of the novel is Smith’s intricate writing: the way she portrays complicated relationships between humans, the transitional period of growing up, the way experiences from the past cast a shadow or a light over the present. Swing Time is a good pick for anyone looking to dive into a substantial novel over the summer months, and leaves the reader wanting to explore Smith’s other novels.