A spy novel with the pace of a thriller that takes place in Vietnam and the United States during the war : what’s not to love? The 2016 Pulitzer prize winner is Viet Thanh Nguyen’s debut novel and is packed with unexpected twists, superber writing and a welcome unique perspective. A sure pick for your summer reading list. 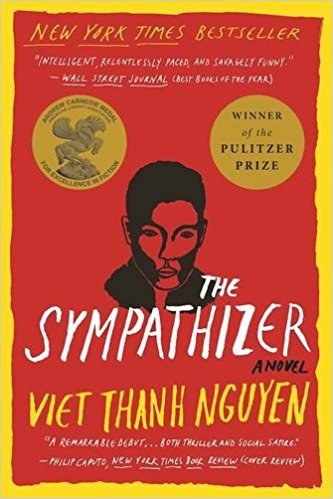 The Sympathizer is the story of a communist agent based in the United States. The Captain, our protagonist who remains unnamed, was born in Vietnam, studied in the United States, and has a lifelong friendship with two other characters: Bon and Man. We learn early on that his words are his confession, that he is running through the larger-than-life events of his time as an agent. While in Vietnam, we learn that his mother had him very young and that his father is a French catholic priest. While in the US, he sends back information about counter-revolutionary activities through invisible ink to his contact back home.

The novel is non-linear: it skips back and forth in time and travels from the US to Vietnam constantly. The developments of the Vietnam war are in the background. At one time, the Captain takes on a job to work with a film crew producing a movie about the war. His role is to legitimize the use of Vietnamese extras, but in the end he gets the feeling that he is simply propping up American propaganda. His internal conflict is real and well chronicled.

The storyline is messy just as war is messy and complicated. While the theme of ideology is present throughout the pages of the novel, it seems as though the primary theme is more about contradiction: the contradictions between one’s beliefs and life choices, the contradictions between the motives and consequences of war, the internal contradiction between belonging to two places and to nowhere at once. Our main character identifies as a revolutionary, albeit a subversive one, and it seems to be the only thing he is sure of.

There is one drawback to the novel, for which sensitive readers should be warned. It features lengthy passages, some which include scenes of torture. Whether they were necessary and serve a means to an end is a good question. They cast a shadow on an otherwise fascinating, complex and intricate novel.

Overall the descriptions of the complicated relationship the Captain has with Vietnam and with the United States is brilliant. He relates to both, loves aspects of both, and hates parts of both as well. He lives the contradiction of war, and his tale is more personal than it is political. To enjoy Viet Thanh Nguyen’s brilliant writing, and to appreciate his most cunning scenes, The Sympathizer is a great summer read.