Patti Smith has had a long, creative life as a singer-songwriter, poet and visual artist. In Just Kids, she writes the memoir of her relationship with photographer Robert Mapplethorpe. She dives back into the New York City of the 1960’s and 1970’s when both of them were young, emerging artists and just getting started in their life-long artistic journeys. 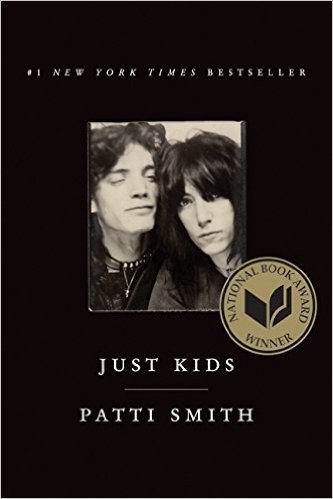 The book begins with Smith’s arrival in New York, where she wanders without fixed housing for some time. She eventually begins working in a book store, and details her first meeting with Robert. They begin a romantic relationship: they don’t have much money and sometimes struggle to eat and make do. They are both driven by a need to create and develop their art, and much of their early time together is spent working on their various projects. Patti Smith has immense literary references that infuse all her work. She is obsessed with French authors and will spend some time travelling in France inspired by the bohemian artist lifestyle. When she returns to New York, Robert is sick and she manages to find them a room at the iconic Chelsea Hotel. They will stay there for some time, sharing moments with many artists and musicians who hung around. The book chronicles both Patti’s and Robert’s development as artists, the methods and mediums that they each chose, and how they would work together or apart. Through the chapters, they evolve through their first shows, their first hits, through the major choices that will shape their lives. While their romantic relationship had some highs and lows, their artistic commitment persisted. Robert died in 1989 at the age of 42 from AIDS-related complications, and that’s when Patti promised him that she would tell their story, someday. The strength of Just Kids is in Patti Smith’s pen: her writing is delicate, poetic, and heart-felt. It is easy to get roped in to the vibrant Manhattan scene of the 60’s and 70’s, especially given the number of references she makes to the time’s artists and musicians. Her stories of Robert read a like a love letter. It is obvious she reflected many years after his death in order to convey the moment in time they both shared. For those who know well the work of Patti Smith, or for those who want to know her better: Just Kids is a great read.   4/5 Just Kids by Patti Smith