Emma Donoghue was born in Ireland and now lives in London, Ontario. Her last book, Room, was a hit and made into a film for which she also wrote the screenplay. It was the story of a woman and her son being held captive in a man’s shed: not the most uplifting subject and yet told with lightness and might. Her most recent book, The Wonder, builds on a different theme: an eleven-year-old girl in the Ireland of the 1850’s stops eating for religious and spiritual reasons. Here too, Emma Donoghue treats a dark topic with so much grace. 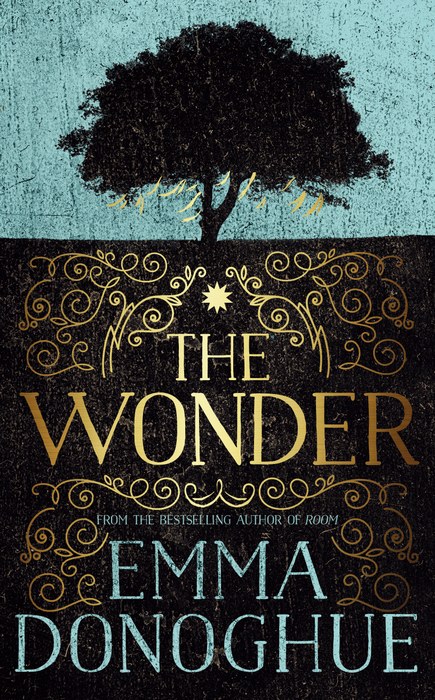 The story begins with Lib, an English nurse who worked in the Crimean war and has lived through its horrors. She is sent to a small village in Ireland on assignment. Only upon arrival does she learn that she will be watching over Anna, a young girl who appears to not have eaten since her eleventh birthday, four months ago. Lib and another nurse, a nun, will split shifts to oversee the girl’s activities in the name of a committee tasked with uncovering the truth, or upholding it, around the mysterious fasting girl. There is much fanfare around Anna. Visitors come from away to see the prodigy with their own eyes. A collection box is set up at the family home’s door, in which contributions for the poor are deposited. She is hailed as a miracle of god, a small being who requires nothing else but love from above to survive. But Lib is not fooled. She knows that a little girl, like any human being, needs water and nourishment in order to live. Lib is an outsider: she’s English and she’s not Catholic. She must work hard to overcome these challenges and gain the trust of her entourage: the girl’s, the girl’s family, the local priest’s, the doctor’s. If she raises questions about Anna’s health, she is called out as heretic. The relationship between Anna and Lib is central to the book. Lib’s outlook as a nurse gives their rapport a clinical one, but Anna’s humanity and spirit makes it a human one. Lib relies on science to help Anna, and the girl responds with scriptures and quotes from the Bible. It is mysterious and strange. At the heart of The Wonder is the question of religion and faith. The village and its inhabitants represent, in some ways, the reign of Catholicism. They speak the same language, so to speak, and appear to move in tandem while using God’s will as a cloak. Lib tries her best to poke holes and will hit many walls along the way. Lib will be shaken to her core by her time with Anna: it will be joyful and heartbreaking. She becomes exhausted by the weight of the watch, the lack of sleep, and feelings of helplessness. She will however stay determined to find out what’s going on and give the girl a chance at life. The Wonder is a hard book. It questions the role of faith and religion in people’s motivations. It sheds the light on dark corners of humanity that can often be masked or distracted from by the arms of institutional religion and whichever God is concerned. As a reader, we grow fond of Anna and we become supportive of Lib in her attempt at helping the girl. Emma Donoghue is a masterful author who puts love and light in those dark places. 4/5 The Wonder by Emma Donoghue