Review: The Circle by Dave Eggers

When a young woman in her twenties lands a job at the world’s largest tech company, she sees only shine and glitter. Her new job at The Circle is the starting point of this novel by Dave Eggers, in which he paints the picture of an advanced tech world where ‘sharing is caring’ and ‘privacy is theft’. 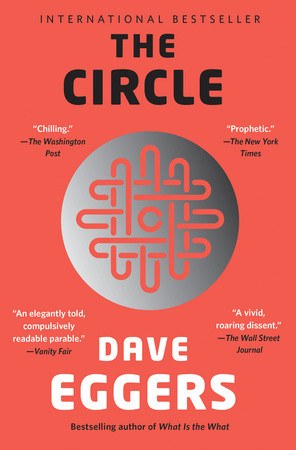 Mae Holland is, in her eyes, wasting away her talents at a small-town utilities company, when her luck turns. An old school friend, Annie, opens the door to The Circle, giant technology company, where Mae starts a job as a “customer experience” clerk. The Circle has overtaken relics such as Facebook and Twitter, and has done so thanks to its TruYou innovation. In short, TruYou is a service that confirms everyone’s true identity on the Internet and removes anonymity from all interactions, and in this world, it has ushered in a new era of the Internet.

The Circle’s main workplace, or campus, is in California. It is straight out of Mae’s dreams: green spaces, glass buildings named after significant eras, dorms where you can stay when working late, group activities and parties, essentially the idyllic workplace for young professionals. Mae’s welcoming committee sets her up with a monitor on which she is to conduct her primary work. She gets used to it easy enough, until she gets a second one, a few days later, where she is to keep up with internal chat messages. And again, a third monitor is installed where she is to stay on top of thousands of “zings” which are the social communications with the outside world. A fourth one later arrives, and so on, and so on.

To the reader, it quickly becomes obvious that there is a trade-off to the total immersion into technology and the complete lack of privacy. Mae, however, keeps diving deeper and deeper into the work, the zings and adopts the Company’s values to the point where she is breaking ties with the real people in her life: parents, past friends, etc. Her entire world becomes The Circle and her life is no longer her own.

At an early stage in her employment, Mae gets in trouble with her supervisors for an incident she caused at night. In a moment of what can only be interpreted as burn-out and/or over-stimulation, she gets into a kayak and paddles out into the night. Although the kayak was borrowed without proper notice to the rental company, and the cops were called, these are not the main reasons Mae gets reprimanded. As a new employee keen to impress, she gets scolded because she had previously not disclosed the fact that she enjoyed kayaking, that she had not connected to other “Circlers” who enjoy kayaking, and had not posted anything about the fact that she went kayaking that night. The fact that her crime was to keep the pure joy of kayaking at night to herself shows the climate in which Eggers' characters are evolving.

The book as a lot going for it: the rise of an everyday girl, her development within the Circle community, her interactions with mysterious characters who aren’t who they claim to be, and a slow but certain descent into the tyrannical monopoly of a single private corporation – it’s a well composed thriller. There are many funny moments, such as an anecdote where one character utters: “There was some wine in the waterfall—by the Industrial Revolution”, referring to one of the campus' buildings.

Throughout the book, I kept looking for hints of resistance that could be interpreted as an anti-capitalist strand within the characters. I wasn’t finding any, and it is because the world portrayed by Eggers is one that is the natural extension of the one we are in now – it is the continuation of the capitalist, profit-hungry, tech-driven world we live in. That’s the scary part.

Egger’s comment serves as a warning. It sounds the alarm against our tendency to over-share, to fail to demand accountability from companies who mine our information, and mindlessly go wherever the flow of technology takes us, ignoring its toll on us and our rights.

The Circle is an easy read: don’t look too hard for a deeper meaning or for subtle character development. It’s a page-turner, and one that tackles some of today’s most current themes: technology, work, privacy, and the Internet. I found myself thinking about the book when doing daily actions such as posting to social media and responding to email at work. Something from this book sticks and is so relevant to the current state of affairs.

Despite slight shortfalls in the depth and quality of the writing, overall, it’s a good book. It’s worth noting that they’ve just announced the production of a movie based on The Circle, with John Boyega, Tom Hanks and Emma Watson – making it an even more timely read. Also, if you’ve already read The Circle, check out Dave Egger’s new book just released this week: Heroes of the frontier.

The Circle by Dave Eggers