30 years of The Handmaid's Tale: a book review

In 1985, Canadian author Margaret Atwood published The Handmaid’s Tale. The book would go on to win the Governor General’s Award for English language fiction that same year and further establish her as a prominent writer. As a francophone reader, I am late in the game of reading Atwood’s work, but this novel’s 30th anniversary prompted me to add it to my summer reading list. As it turns out, The Handmaid’s Tale is a timely, provocative read for initiated and first-time readers alike. 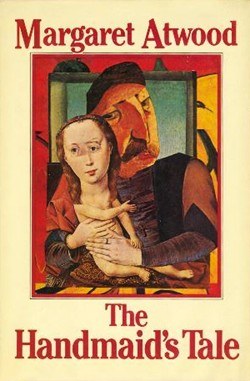 The Handmaid’s tale anticipates a world where the government of the United States has been overthrown by a religious dictatorship enforced by a military structure. It is set in the near-future, where characters navigate the treacherous waters of a new order while remembering episodes of their previous life, such as smoking cigarettes in the kitchen and going out with friends. The world Atwood builds is intricate. There is a power structure in which men and women play different roles. There are agents of the state, known as the Eyes, who operate a far-reaching network of surveillance to bring to light and justice those who do not follow the established rules. There are Commanders who run the country and to which women are subservient. Then, there are the women who handle domestic affairs and for whom having a child is at once their only purpose and a process over which they have no control. Those who can must bear children for the ruling class. Everyone reports to someone, and anyone might get caught and killed if found in breach of the laws of the land. The setting may be complex, but the voice who tells the story is simple. Offred, the novel’s main character, is a Handmaid – a fertile woman whose sole purpose is to get pregnant – tells of her newly imposed life in Gilead. She oscillates between stories of the daily events in the house where she resides to memories of the past, her former life, where she had a partner, a child, a job. She hangs on to the distant memory of normalcy. What happens in the book is both on the micro and macro scale. Offred is struggling, internally, to make sense of the series of events that have led to hear wearing a heavy frock, having no control over her sexual encounters, and being alone and in distress. She struggles with feelings of isolation, despair, desire, and seeks human interaction of the consensual kind. She is also a tiny piece of a large puzzle, a pawn in a giant game where women’s bodies are commodities, where people have no information or power to keep rulers accountable. We learn bits and pieces of information about the outside world at the slow pace that Offred can gather information from various covert sources. There are many fascinating elements in the novel, two of which I particularly appreciated. Firstly, the society depicted by Atwood is a dystopic, authoritarian world in which the patriarchy is upheld. The gender focus of the novel is clearly it’s distinctive characteristic: it pushes the limits of a world where women do not have authority over their bodies, where a woman’s right over her body contravenes the established order. Secondly, throughout the novel, a sort of underground resistance begins to emerge. We start to see hints of people questioning and resisting, even when facing the worst consequences. This gives the novel a hopeful tone and captures the intricate ability for humans to fight back, over years, over decades, through covert means and networks, to get out, get away, and be free. I started reading speculative and science fiction before I tackled Margaret Atwood’s work. Reading The Handmaid’s Tale was a brilliant way to come to recognize her important contribution to the genre, and to come face to face with the her political imagination. I really encourage reading or re-reading The Handmaid’s Tale. 5/5