It came as a surprise, in August, when Colson Whitehead’s latest book was chosen as Oprah’s book club selection. The book was immediately released one month ahead of time, and instantly became the topic of discussion in the literary world. The Underground Railroad tells the story of Cora, a young woman born into slavery in Georgia, who will try to escape by travelling on an underground train. 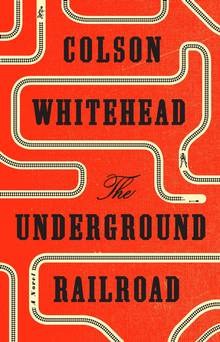 The book begins in a cotton plantation in Georgia. Cora is the daughter of a slave who ran away, leaving her behind when she was very young. We learn early that Cora has learned to fight, and hold her ground, against slave owners or other slaves when necessary.

Her mother’s escape, and her fierce nature, has built a myth that will follow Cora when she is growing up. She has few friends at the plantation, and is seen as an outcast. In early stages of the book, we get to know the cotton plantation’s daily grind, the stories of the various slaves who were bought and brought there directly from Africa or from surrounding states. We also get a glimpse into the slave owners: their family ties, the ones who are most likely to lash out at the slaves, those who are more likely to give them a break.   When a new slave arrives from Virginia, Cora will be faced with an opportunity to run. Caesar, the closest to a friend she really has, tells her about an underground railroad for which there is a station a few days away. He plants the idea that, with proper planning, they can make it. She understands the perils and knows that the chance of getting out, to safety and to freedom is much smaller than the risk getting caught or even death. A clash at a plantation festivity will precipitate her decision to take the chance. They venture out, with minimal provisions, in the light of the moon trailing an unfortunate third wheel – who discovered their plans and would be likely to talk if they didn’t bring her along. Very soon, Cora has walked farther than she ever had from the only home she ever known. It won’t be long until they run into trouble, with slave catchers being rampant and a high price put on runaway slaves. They will make it to the first station, though, where they will embark on the first leg of a long trek. The Underground Railroad becomes the journey of Cora, through various states, travelling North, or East, or wherever the railroad takes her, hopefully away from the plantation. Herein lies the brilliance of the book: the Underground railroad is an actual train: a series of tunnels built by “those who built everything in this country”, leading to mysterious stations where anonymous strangers benevolently help runaway slaves get to the next point of safety. The voyage is long and treacherous. Slave catchers are onto Cora’s trail, and there is no place to hide. She will face hitches, and find stations where she will be held up for months at a time, leading her to wonder about the relative freedom that she is seeking. The railroad is a character in itself. It has a life of its own, is tended to by strangers who leave baskets of food for travellers, and conduct the train according to an undisclosed schedule. It is a brilliant play on the historical understanding that there was a covert network of people who established a secret path to get slaves North to Canada, to freedom. The railroad puts physical characteristics to a network that has long been known existed, but not very much documented through history. To breathe life and steam into this underground train is imaginative and the true strength of the novel. This is not a light read: slavery is hard, violent, oppressive, and fear is felt at every stage of Cora’s long perilous journey. The storyline is at times hard to follow, since the author moves back and forth in time to retell stories, memories and dreams. However, the novel brings to life stories of slavery and escape, stories that have too seldom been told in the past, and that are necessary to understand the history of slavery and work in the Americas. For its imaginative qualities, and its timely comment, Colson Whitehead’s The Underground Railroad is worth adding to your fall reading list. 4⁄5 Bonus link: The Perilous Lure of the Underground Railroad