The criticism of the Leap Manifesto as being too radical or too far to the left falls flat when examined in the context of current policy of progressive energy labour unions. The fact is, the Leap document is not ‘radical’ in essence, it is centre-left/liberal. This is a problem for those who want to discredit it with baseless name calling. Unfortunately, calling it far-left or extremely radical causes confusion and undermines the broader left program demanding the necessary radical solutions to climate change. 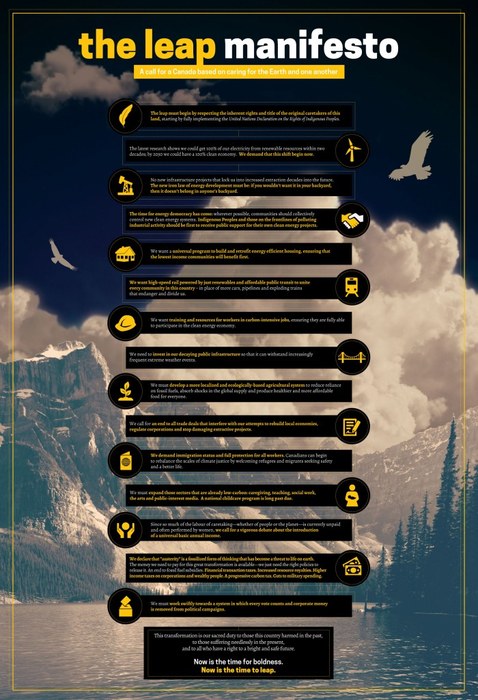 The essential politics of a policy do not change with time or place. The only thing that changes is the ability to implement it. One only need to look at how often through history socialist politicians (and the NDP) have been proved correct. Their advocacy for policy who’s “time has not come” can be called out as impractical, but that has not stopped socialists from advocating it. In some ways, it is what differentiates socialists from liberals (who are always calling for us to wait longer and stop pushing so hard).

I get the argument that some cannot tell the difference and there are always a host of reasons why, but as socialists our struggle is to see the world as it is and – as clearly as possible – call it as such and suggest alternatives.

The main point of the Alberta NDP government when it comes to the Leap Manifesto is that it cannot be fully implemented right now. This is an interesting and important debate to have on the left especially when the left is in power, but a debate on implementation is hardly the same as a debate on the content of a policy document (the little of it there is at five pages of 18pt font). The broader left social movements should be taking a more critical look at the document and discussing what acutal policies we should be supporting.

The fact is, the Leap document is not, in essence, “radical”. It is centre-left liberal and calling it far-left or extremely radical causes confusion and undermines the broader left program. It does not even come close to policy adopted by CUPE (which is a large electrical energy union) and other unions around the world who also have energy sector members. Many of these unions would not reject the Leap Manifesto and you would be hard pressed to call all of them radical socialists.

In much the same way workers and communities came to oppose fracking in New Brunswick – similarly sold as a quick fix to the economic malaise gripping that province – unions need to tell their members the facts around energy and suggest alternative routes for discussion. It is why CUPE’s membership endorsed it without hesitation – a membership which is hardly made up of “downtown dilettantes”.

The Leap document does not go nearly far enough to meet the on the book policies of these progressive unions. The Manifesto pans large-scale monopoly public ownership and under-states the level of which Canadian energy is already low carbon and publicly controlled. It doesn’t talk about what a just transition for workers actually looks like and/or who should pay for it. The document does not talk about public investment in productive capacity to drive transition away from fossil fuels. It leans too heavily on individual consumer-driven changes that most cannot afford to make. And it promotes carbon pricing and market mechanisms for transition to green energy. Even if it corrected all these things, it would become left enough to be called social democratic, but certainly not radical in any historical sense.

The opposition to new investments in pipelines to facilitate increased extraction of fossil fuels is growing, not diminishing. In fact, progressive unions like CEP (and now Unifor) have taken similar positions on the unsustainable and short-term profit-driven expansion of the Alberta extraction industry. An industry, that I don’t need to tell people, has not had the long-term interests of Alberta in mind. Being on the correct side of history on this issue is something that should be rather obvious to everyone.

Unions need to speak the truth about investment in oil pipelines as something that can actually improve Alberta’s economy. To say that the debate is still out on that is an understatement.

Should the NDP in Alberta put policy on oil pipelines as it main platform point going into the next election? Probably not. But, should it have a progressive vision for providing Canada and workers in Alberta a secure future and a plan for a diversified economy, just transition for workers affected by the price of oil and the need for future proofing their economy? Damn right, they should and we should expect nothing less. And, I think for the most part they are.

We can start with the Leap Manifesto since it has been placed before us and clearly articulates the issues facing Canadians, but we do not need to stop there. Let’s push ahead with progressive policy, policy driven by a socialist analysis of the real world. A policy based on workers' needs and a future where the next generation can enjoy a better life.