Prices go up because supply is limited or demand has increased faster than supply.

Both things are happening right now.

The Phillips curve is an old idea that inflation and unemployment are directly related—if you can control one it will affect the other.

Here is what the mythical Phillips Curve looks like: 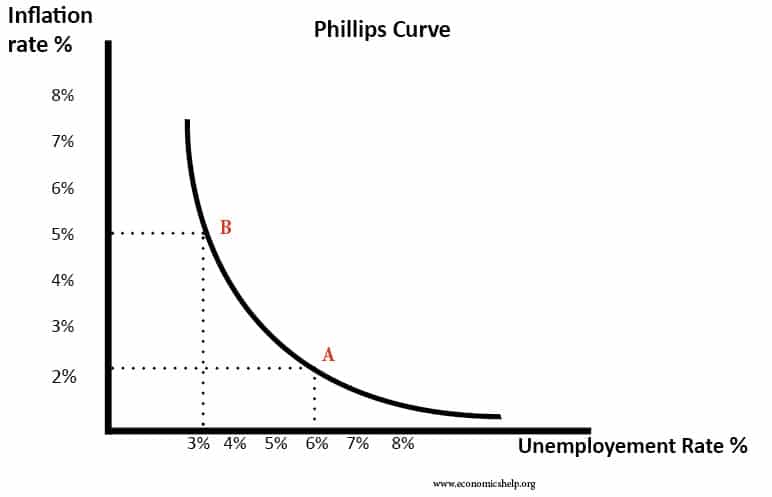 See the nice smooth relationship between unemployment and inflation? The idea is that as "unemployment" is reduced, inflation will naturally increase along the curve. The question is, does this happen in reality?

Here is a graph showing the real data (compiled by Anwar Shaikh): 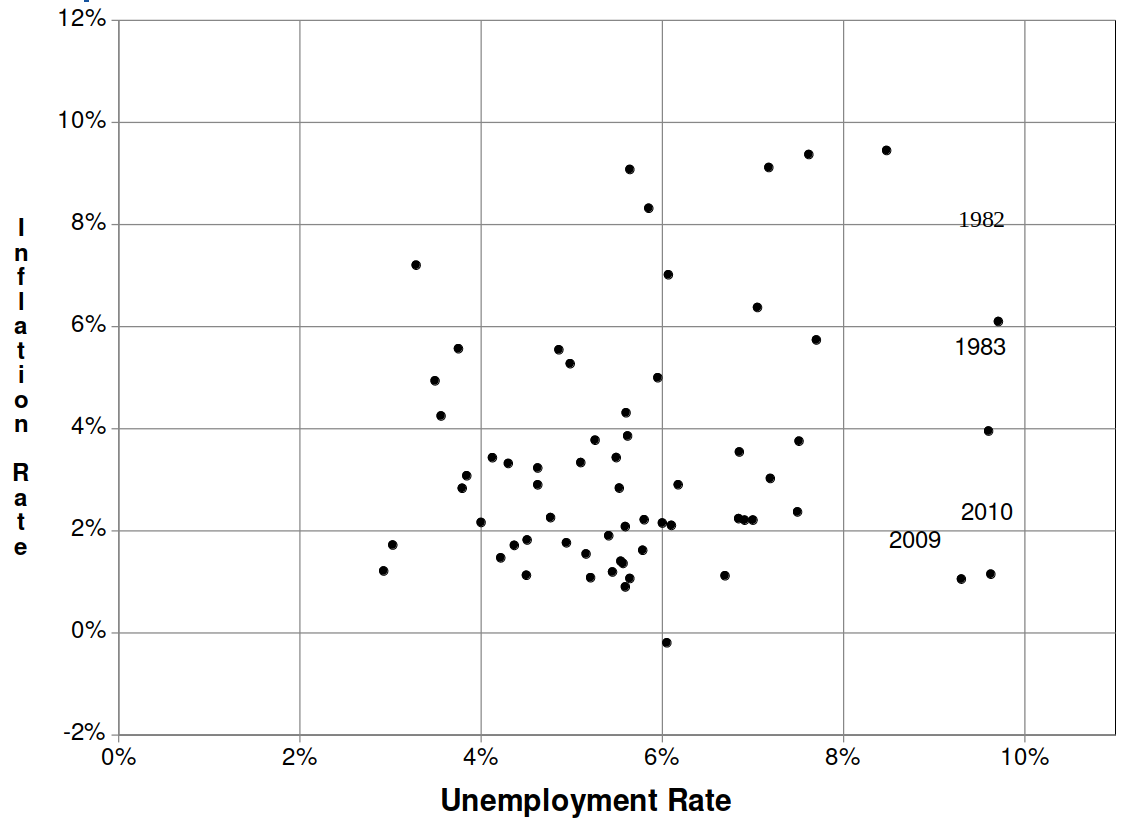 Notice that in the real world inflation and unemployment are not even correlated. They never really were and they are certainly not causative.

Why do we care to point this out? Because the wages argument is related to this understanding of economics.

At a very basic level, Neoclassical economics says that:

So, in this economic theory, if wages go up, prices will go up to maintain the normal rate of profit. This is where the "wage-price spiral" nonsense comes from.

Wages and the Phillips Curve

What does this have to do with the Phillips Curve? Under neoclassical economics, wages are simply taken by workers and are a direct function of labour markets and unemployment.

They also believe that the more government allows workers to fight for wage increase (that is, they unionize) the higher the artificial employment rate, the more wages they get, and thus the higher inflation and prices go.

It is all nonsense and few serious economist actually believe the economy is this simple. Keynesians have come to realize that productivity has something to do with inflation and the story is complicated, though they still do not really have a theory of inflation. Modern neoclassical economists know something else is going on too. But, you would never know that reading the newspapers/blogs/websites.

Economists like Larry Summers and central bankers like Powell think something like the Phillips Curve should drive government economic policy. They wants to get back to "A" on the graph above. The problem is that the curve doesn't exist, so there is no "A" to go back to and we are not at "B" right now.

It is difficult for many people to understand that this Phillips Curve does not exist because central bank economists only talk about unemployment and inflation. A central bank only has a few levers they can control, the main one being their target interest rate.

The response to inflation from a central bank to try to drive interest rates up, which drives unemployment up, and hopefully brings inflation down. This is based very specifically on the Phillips Curve: more unemployment means lower inflation.

The central bank cannot do anything else because it does not have mandate to do anything else. It can only set interest rates by attempting to affect the price of debt (and the printing of money).

All driving interest rates up does is drives the economy into crisis which creates a bigger problem than whatever was causing inflation. Eventually, the new crisis will likely result in enough economic and social destruction to bring inflation down—if you wait long enough.

In the real world, the answer from the data is clear and not at all related to this Phillips Curve idea.

Wages and profits compete with each other. If wages go up, profits go down. There is no ability to "just increase prices" and get your profits back. Prices are regulated by competition with other firms.

There may be oligopolies and monopolies involved in price setting, but there are so few situations like this that their impact on general price increases are limited.

So, do wages drive prices? No. Prices are driven by a bunch of things, wages not really being interesting to much of that. Prices are driven by competition between firms, bounded by input costs (expenditures of production, leases, wages, maintenance of machines, electricity, etc) and debt payments.

What happens when real costs of a company increase? Profits go down.

What if everyone's costs increase? Prices go up and profits of some producers go up—but only in the short run as profits can increase faster than wages. Eventually workers demand more wages when they see the increased profits. Then profits come back down if workers win in their wage demands.

In this reality-based model, profits and wages battle for the larger mass of revenue from the prices increases, but this battle is not driving prices. Prices were driven-up by the value of money declining (inflation) and—in the current situation—the supply chain and production disruptions that have dragged on supply of needed things, driving the price of good up.

In this reality-based story of real economics, prices are not related to wages at all.

But, you can see why capital wants you to think that wages are the problem—they want to keep the short-run profit spike going.

The problem with this reality is that profits do not drive prices either. Unfortunately for our side (the Left), we love the narrative of profits driving price increases as a response to those pushing the "wage-price spiral", but it is not technically true. If it were, it would be equally true that wages drive prices. What we mean to say is "profit subsidies of the kind created since 2009 have driven inflation (this time)". Well, splitting hairs? Maybe.

This is one of the problems with (post)Keynesian analysis.

However, on a political level there is a conversation about equitable distribution of that excess profit being created by the current situation. Working families are struggling to make ends meet while profits are increasing. The answer is the redistribution of those profits to those in need—those who have nothing to do with the causes of general price increases we find ourselves facing.

These are a list of papers and articles critiquing the concept of wages driving prices and critiquing the Phillips Curve. They span the economic field from neoclassical to modern Keynesian to classical.

They were compiled with thanks to many others who are also unimpressed with the current mainstream focus on wages as some sort of driver of inflation and price increases.