What is a general strike?

Today is May Day, International Workers’ Day. With roots in the workers’ struggle for an 8-hour work day, this day has been marked for more than a century in countries across the world. May Day is a great day for socialists, labour organizers and agitators to draw connections between the workers’ struggle under capitalism and the gains we have made in history. May Day is marked around the world with cultural celebrations and also protests where workers’ rights are under attack. 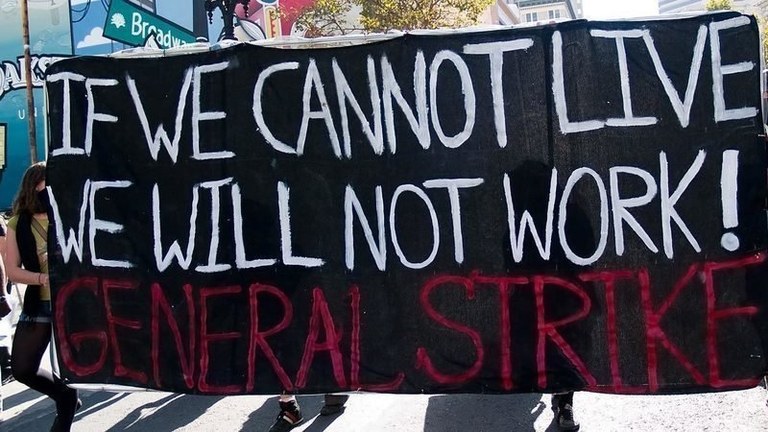 This year, May Day coincides with the arrival of an alarming tone for workers’ rights in Canada. The Ford government in Ontario has rolled back labour legislation and made student union dues voluntary. The just-elected Kenney government in Alberta has clearly campaigned on attacking unions for political activity, and is poised to unveil some form of attack on organized labour.

It’s no surprise, then, that we’re hearing calls for wide-spread protests and even for a general strike. Labour unrest in the form of direct action and a general strike is the last line of defense and the ultimate demonstration of workers’ power when politicians act to maintain the supremacy of capital; when they declare open class war.

What is a general strike? What does in mean for worker and unions in Canada?

In Canada, a strike happens when workers withhold their labour – stop work, “down tools” - as a last course of action, normally in the process of bargaining a collective agreement.

A strike is always democratically decided on by the workers in the affected unit or workplace. To begin, workers in a given workplace must vote in favour of using the strike as a last resort. A strike is understood as a last resort because workers don’t get paid during a strike. A strike can be very difficult, tense and emotionally-charged and it would be preferable to avoid a strike to get a collective agreement. Sometimes, however, a strike is necessary to balance out the employer’s power.

In Canada, the strike is codified and regulated in law. A legal strike happens in the context of active collective bargaining and following a strike mandate vote. When we talk about a general strike, we are expanding the idea of striking to a broader group of workers.

A general strike involves multiple workers across many sectors represented by numerous unions, and it also incorporates non-union workers. It is no longer about a specific demand like improved working conditions or increased wages.

A general strike is often referred to as a social strike, or also a popular strike (grève populaire). In 2012, when students were on strike in Québec, the government’s passage of special Law 78 which significantly restricted freedoms of association was taken up by the broader population who responded by staging nightly protests. While the strike began as students democratically voted to walk out of class - for a sustained period of time - in response to the government’s tuition fee hike, it later expanded into a social struggle where a broader cross-section of the population was compelled to take action.

A general strike is the coordinated response to a general state of injustice, such as a government stripping away workers’ rights or basic civil liberties, a general widespread inequality and state of destitution for average citizens, or state-sanctioned poverty and/or corporate greed.

Just like a workplace strike, a general strike is a strike against capital.

Canadian labour law sets out rules for when and how a strike against an employer can occur in the process of bargaining a collective agreement. Strikes outside of collective bargaining and strikes against multiple employers and governments on broader social and economic issues are generally outside of that law.

Some of the restrictions on “political strikes” were tested following Ontario’s “Days of Action” brought against the Harris government in the mid-late 1990s. A sample of those cases and the discussions they contain on permissible restrictions on strikes can be found here.[[https://www.canlii.org/en/on/#search/jId=on&text=][]]

In 2002, the Supreme Court of Canada (Pepsi-Cola Canada Beverages, [2002], 1 S.C.R. 156) found that peaceful protesting and picketing is permitted and protected activity as part of the right of freedom of expression. As stated by the Court: “The core values which free expression promotes include self-fulfillment, participation in social and political decision-making, and the communal exchange of ideas. Free speech protects human dignity and the right to think and reflect freely on one’s circumstances and condition. It allows a person to speak not only for the sake of expression itself, but also to advocate change, attempting to persuade others in the hope of improving one’s life and perhaps the wider social, political, and economic environment.”

And yet: general strikes happen

The law is one thing, the overwhelming sentiment that can sweep through an entire workforce and compel people to walk out is another thing altogether.

General strikes occur all over the world, in jurisdictions with laws widely different on strikes and concerted action. In the face of injustice or deteriorating working and living conditions, the power of a general strike can bring down governments.

While the general strike is a withdrawal of labour, other tactics may be chosen by organizers and movements to draw attention to an issue or try to compel government to change a policy or law: protests, rallies, occupations are all actions that contribute to building momentum and visibility for certain positions, but they are not general strikes.

While some wide-spread concerted actions are spontaneous, organizers know that a movement can only spread on a strong foundation that has been built, organized and nurtured over a period of time. The process to organize a general strike is one that is part and parcel of the work of labour organizers and agitators. Organizers should always be trying to determine how engaged and aware is our membership, and how close they are to tools down, regardless of their sector of work and union membership.